Table Mountain: Wonder of the World

The Connect-123 office and many of our international interns’ apartments boast some of the best views of Table Mountain, that magical towering presence that presides over this beautiful city of Cape Town.

The New 7 Wonders Foundation is taking international votes to nominate the New 7 Wonders of the World with the philosophy that “Our Heritage is Our Future”.  Table Mountain has made it to the final 28 contenders to take the superior title of truly being one of the World’s Wonders, and rightly so… 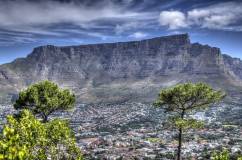 Table Mountain is one of the oldest mountains on earth, six times older than the Himalayas and five times older than the Rockies. Its story begins eight hundred million years ago when sandstone began to form underwater. Around 300 million years ago the mountain was still at sea level during an ice age. It is the ice sheets that flattened the layers of sandstone creating the flat surface that gives the mountain its unique shape and name.  When the continents split apart, the layers of rock were forced to rise, slowly becoming the kilometre high mountain Cape Town prides itself with today.

It is not only the mountain’s iconic flat surface that gives it the right to contend for a position as one of the 7 New Wonders.  In addition, Table Mountain National Park has more plant species within its 25 000 hectares than the whole British Isles or New Zealand!

Only one other African site – Tanzania’s Mount Kilimanjaro – made the list of finalists, which include some of the world’s most spectacular natural attractions including the Grand Canyon in the USA, the Galapagos Islands off Ecuador, and the Amazon Rainforest.

In the meantime, be sure to hike up one of the spectacular routes to the top so that you can say you made it to the top of one of the 7 Wonders of Nature!